Allow your donors to switch to the currency of their choice and increase their overall contribution with the GiveWP Currency Switcher add-on. Select from an extensive list of currencies, set the currency based on the location of your users, pull from live exchange rates and more!

Donors often prefer to donate using their own country’s currency. Giving donors the option to switch to your currency can reduce abandoned donations and increase overall donations.

The Currency Switcher add-on has been developed with an intuitive interface and powerful features designed to give you flexibility when setting up your multi-currency donation forms.

Changing currency should be super simple for your potential donors. We have adapted GiveWP’s intuitive interface to support multiple currency options with support for mobile devices, tablets and, of course, computer interfaces.

Eliminate the confusion of giving in a foreign currency. Enable automatic selection of the donor’s currency based on the visitor’s location. This feature uses GeoLite’s leading data provider, MaxMind, to detect where users’ location is using the most reliable methods possible.

Easily enable geolocation without having to register with any third-party service. Customize a backup if the donor’s location is hidden or not found

Eliminate the hassle of exchange rates The Currency Switcher add-on allows you to select from the major exchange rate APIs to retrieve accurate rates for all your accepted currencies.

Quickly enable Google-powered exchange rates without an API. Rates are updated according to a customizable interval set by you.

Often, when changing currencies, donation levels will not even be amounts. If you want more control over the amounts in each currency, you can easily adjust them manually. This works for both established and multi-level donation forms.

Customize the currency amounts per level to ensure that your amounts are always even numbers.

Customize currency amounts per level to ensure that your amounts are always even numbers.

Certain gateways only support specific currencies. To adjust which gateways it accepts, we have incorporated a great utility. Select which currencies, globally and per form, you accept per payment gateway. GiveWP is the only donation platform that features this type of gateway support for multiple currencies. 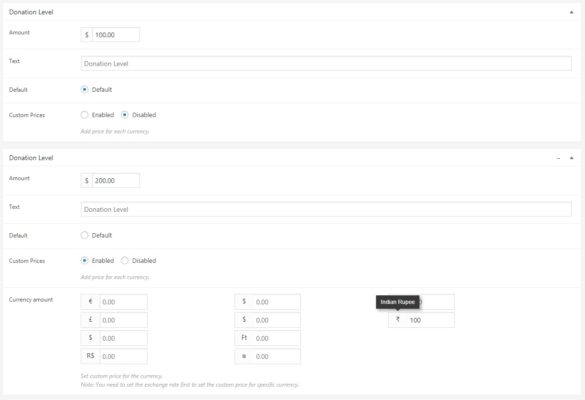 Change the currencies you accept per gateway quickly and easily globally and per form.

Global and per-form settings have been developed that allow you to enable settings for all forms or just specific donation forms – the choice is yours!

If you want to control exchange rates, you can lock a rate at a specific value and not update it automatically, and set it manually using your own custom value.

Extensive currency support – choose from over 100 currencies for your donors to select from.

Customizable text – Change the text that appears when you change a currency and use multiple template labels that show the base currency, the new currency, and the exchange rate.

Saved Currency Preference – When a donor donates by logging in to your account and returning, your preferred currency is the default.

Many payment gateways will convert the donor’s currency back to the base currency you are accepting through the gateway. For example, Stripe will take Euros and convert to USD if you are based in the US. The end result is that you will be paid in your base bank currency. Please check your specific gateway for currency compatibility before purchasing.